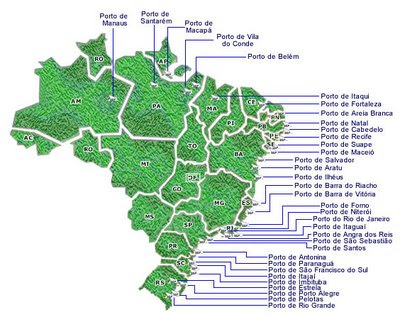 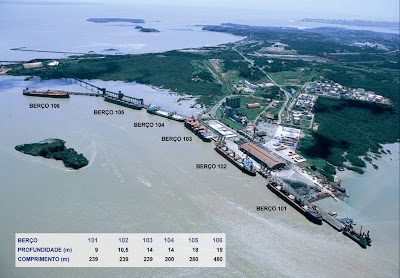 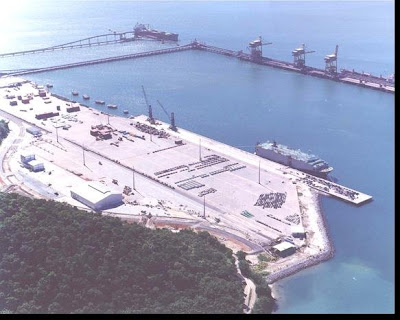 ABOUT DREDGERS AND DREDGING 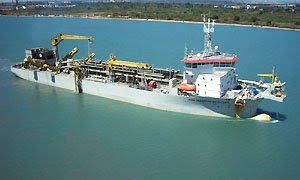 History
Dredging has been in existence for centuries, starting when rowing boats “dredged” the sea for food in shallow estuaries. Since that time the requirements for vessels that “dredge” has evolved into the present day dredging systems of removing large quantities of materials from the sea bed.

Present day dredgers are large versatile ships with considerable power for high capacity removal of spoils from varied areas to be relocated as building materials or just moved from location to location.

Dredger Types
The major dredger types are as follows: 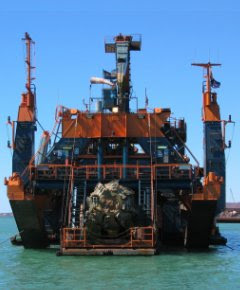 Due to the size of the present day dredgers most have the facility to pump the dredged material ashore, up to 4 kilometres, depending on the “Flux” (constituency) of the material pumped.

This is carried out either by semi-submersible pumps or a floor ejector slurry discharge system pumping through floating pipes to the shore or jet ejector to approximately 100m from the bow of the dredger. This facility on a dredger is called “Pump Ashore”.

Dredgers can be discharged by several methods. Each dredger in her specification will outline the method of discharge. The most sought-after dredgers are the ‘pump ashore’.
The varied methods of getting cargoes ashore are:

- Unload the sand and spoil through the hopper bottom doors when in deeper waters.

- “Rainbowing” through a Snout on the bow which jets water and spoil to ashore or to reclaim groins. This pump ashore method is similar to a fixed fire nozzle on the ships bow but instead of water column it a water and spoil column. Once the material is ashore the weight of the spoil retains it ashore and the water runs off back into the sea.

- A discharge pipe can be connected to the bow Snout to allow discharging of the cargo to up to 5,000m ashore. The shore facility must be able to allow the water to “run off”. - the self discharge variety, which includes…
- “Bucket scrape and belt discharge arm”

- “Below hold belt discharge and discharge arm” Most of the remaining discharge methods are by shore crane and grab facility.

Most dredgers have a through hold dump facility to be able to dredge harbours and estuarial waters and dump at sea away from the dredged areas.
To speed up the dumping process in this type of dredge work “Splitbarges” evolved where the hull splits rapidly dumping the cargo from the hull.

“Self Propelled Trailing Cutter Hopper Suction Dredger” with “Pump ashore facility” Estuarial waters and channels are being deepened around the world as ship sizes are increasing. The dredgers have been designed with a drill cutting unit. These units will cut rock and hard spoil and usually have the facility to dump spoil cargo at sea or ashore and are usually self-propelled.

Self Propelled Trailing Cutter Hopper Suction Dredger vessels are a combination of the “Cutter Suction Dredger” and the “Trailing Suction Hopper Dredgers” where the trailing suction head is replaced by the cutting head.
As noted there are few self propelled Cutter Suction Dredgers as the power requirements are excessive. However only 8 are in existence and several are under construction throughout the world.
Trailing suction hopper dredger - TSHD
Trailing Suction Hopper Dredgers were originally designed to operate within the civil engineering industry to extract sand and fine gravel for the aggregates industry. 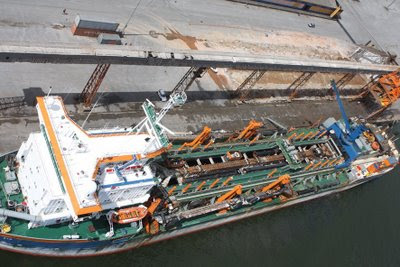 The units have since evolved to clearance of mud etc from harbours and channels and also are utilised to back fill trenches for the pipe laying industry.

These are now becoming large sea going vessels of considerable draft and have the ability to dredge sand and gravel’s from a considerable depth to approximately 100m for the largest vessels.
In order to commence dredging the vessel slows down to under 3 knots and suction pipe / pipes are lowered onto the sea bed. These vessels cannot operate unless the weather and sea state is calm and slight. The spoil pumps transfer the spoil and water to the hold or hopper where the excess water is drained off and the spoil retained in the vessels holds. When the hold or hopper is full the vessel sails to where discharge is required. 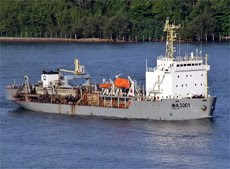 The Trailing Suction Hopper Dredger unloads its cargo in one of the following manners:

- Unload the sand and spoil through the hopper bottom doors when in deeper waters.

- “Rainbowing” through a Snout on the bow which jets water and spoil to ashore or to reclaim groins. This pump ashore method is similar to a fixed fire nozzle on the ships bow but instead of water column it a water and spoil column. Once the material is ashore the weight of the spoil retains it ashore and the water runs off back into the sea.
- A discharge pipe can be connected to the bow Snout to allow discharging of the cargo to up to 5,000m ashore. The shore facility must be able to allow the water to “run off”.

A TSHD type dredge in a 'rainbowing ' operation.

- The cargo can also be discharged through the suction pipe to allow back filling of ploughed trenches for oil, gas pipe lines, and cables that are required to be buried. The Dredgers that are able to carry out this task are all DP ships (Dynamic Positioning).

There are at present only 8 self propelled “Cutter Suction Dredgers” in operation worldwide. These are large high powered vessels used for “cutting” the sea bed. Most CSDs are barges that are towed to the required areas and are anchored or spudded to the sea bed. Spuds are used as the loads on the cutter at nozzle length are high and the spuds keep the vessel from moving whilst dredging.

This is then discharged ashore or to barges for spoil removal. The suction tube has at its end a hydraulically operated cutting wheel that cuts the hard sea bed into small chunks of rock and spoil.
The size of the associated cutters depends on the hardness factor of the sea bed. The cutter units have a high pressure nozzle at their centre and this is used to agitate the cut spoil. The spoil is then normally lifted using an ejector system from the main pump through the suction pipe, so the hard spoil does not go through the moving parts of the pumps.
The spoil is seldom retained on the vessel or barge and is pumped by the ejector system directly ashore or into hopper barges or large lighters for removal from the site. This can be up to 5,000 meters on the most powerful of vessels .
Backhoe/dipper dredger
Backhoe / Dipper dredgers are commonly known as Mechanical dredgers. Mechanical dredgers come in a variety of forms, each involving the use of grab or bucket to loosen the in-situe material then raise and transport it to the surface. They are stationary dredgers, moved on anchors or spuds. Small Backhoe / Dipper dredgers can be track mounted and work from the banks of rivers and ditches. 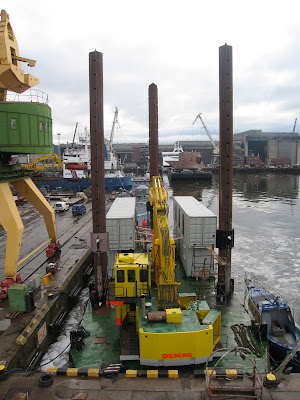 A backhoe dredge type.
A Backhoe and Dipper dredgers are a hydraulic type of excavator. Backhoe and Dipper dredgers again consist of a rectangular pontoon, on which is mounted an excavator unit. The excavator can be either an integral part of the dredger or a proprietary mobile type adapted for marine working. Material is excavated using a bucket of size compatible with the in-situ strength of the material being dredged. 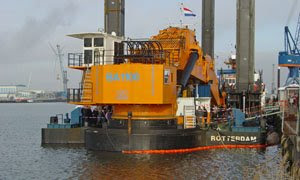 The excavated material is either loaded into barges or directly placed ashore to the arc of the crane. The older form of this type of dredger, the dipper or face shovel, used a wire operated integral excavator and was very heavily built to allow for dredging of hard materials such as rock and masonry. Wire operated excavator units have now been largely superseded by hydraulically operated backhoe machines.
These operate more efficiently than the face shovel. The size of a backhoe dredger is described by the bucket capacity, which can vary between 0.5 and 13m3. Production is dependent upon bucket size and the hardness of the dredge material. Breakout forces in excess of 90t can be exerted by the largest machines and because of very high horizontal loads developed by the jigging motion the Backhoe Dipper dredgers work on spuds.
These spuds are heavy pike-like structures which can be dropped into the sea bed by the dredger. Two spuds are usually mounted at the digging end of the dredge pontoon to provide resistance.
This type of excavator is very efficient and has good vertical and horizontal control. The units are limited to small operations where water depth is low, governed by the arm of the dipper unit.
Grab Dredgers
Grab dredgers are commonly known as Mechanical dredgers. Mechanical dredgers come in a variety of forms, each involving the use of grab or bucket to loosen the in-situe material then raise and transport it to the surface Grab Dredgers come in 2 categories.
1. The first category of grabdredgers are those which come with clam shell grab - see detail. They are usually associated with river deepening where a grab (Clam shell grab) or bucket is deployed and attached to a crane or crane arm and the crane is positioned on the bank of the river or area to be reclaimed or deepened. The spoil collected is either dumped ashore in the area of the crane swing or into vehicles to be removed from the area.
2. The second category of grab dredgers are those which work alongside a suction dredger dumping spoil into a hold whereby discharge is by a bucket arrangement. These units are associated with river and estuarial channel deepening and dredging in restricted areas such as marinas, locks etc. The Grabs are either fixed onto a barge or the barge has a designated crane fitted. These crane barges are normally dumb barges although some are self propelled. Some have anchors at each corner to be deployed to fix the location and some have spuds for securing the barges position. These spuds are heavy pike-like structures which can be dropped into the sea bed by the dredger. The usual method for disposal of the spoil is by lighterage barges which are filled and towed away from the dredge site.
The self propelled grab barges often have their own holds with through hull hoppers for discharge although these are ineffective once moved from the site and have mainly been phased out. Spoil discharge methods are numerous and each can be incorporated into the vessels dredging unit. In each case the dredge barge either has its own power plant and for the smaller units a grab / bucket crane on a dumb barge would mean the crane has its own power. In this case the dredge method is by grab and the usual grab sizes are up to 20ton per lift although dredgers are being developed to 50ton per grab.
Based on articles at DSB OFFSHORE: http://www.dsboffshore.com/site/about_dredgers.php
Postado por Daniel Lucio Oliveira de Souza às 21:13 Links para esta postagem 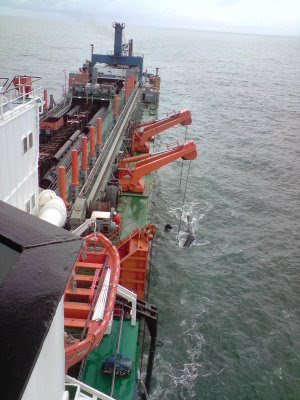 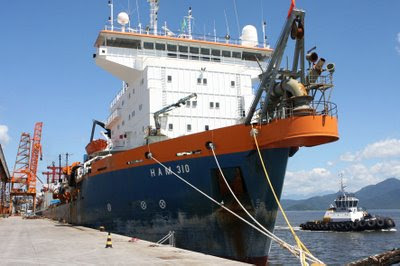 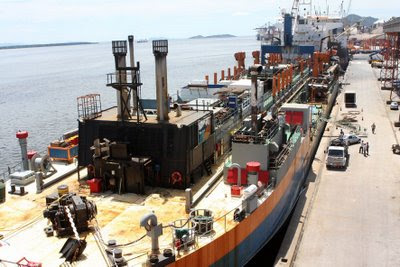 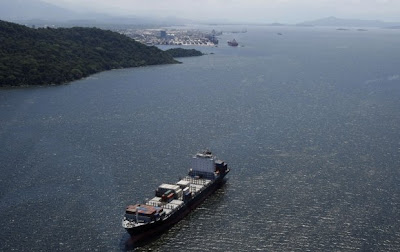 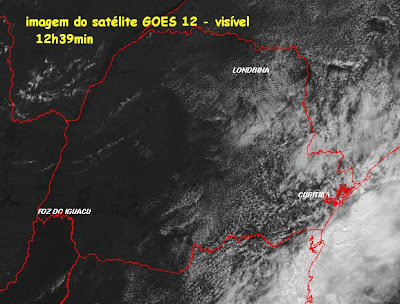